I do so love working late into the night, with the youngest Dragons & Faeries sleeping by the Hearth...

Carrie Louise Rutherford is a sculptor, author, and illustrator. Trained first by her parents, both professional artists, then at Massachusetts College of Art in Boston Mass., she carves wood and sculpts in both earth clay and polymer clay.

Raised in the country at the foot of the Appalachian Mountains in Northwest New Jersey, she was happiest as a child, either wandering the hills alone, loving both solitude from people and the joyful company of nature, or sculpting with and learning about as many materials as possible. Carrie credits her love of the forest, her intense imagination, a penchant for story telling and her own children's adventures for the creation of Dragon Folk Studios, her cast of Characters and her first book, "Legends of Dragon Folk-Wing Tales".

Other influences in play are her love of the BEST that creative minds have to offer; George Winston, Mozart, David Arkenstone, and Steve Earle (for their music). August Rodin and Henry Moore (for their sculptures). The Brothers Grimm, Thomas Costain and J.R.R. Tolkien (for their books) and her husband Herb Diehl, sculptor, musician, and well spring of inspiration. 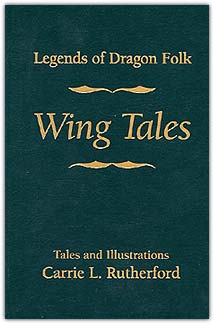